A Call for Aid, Not Laws, to Help Women in Italy

For six years, Monica Fasciolo has worked with women at Servizio Antiviolenza SOS Donna H24, a domestic abuse help line and shelter in Rome.
ROME — Responding to the persistent problem of violence against women, Prime Minister Enrico Letta this month announced “very harsh, very tough” measures to counter domestic abuse and what he called “femicide,” the killing of women because they are women, often at the hands of current or former husbands or boyfriends.

The 12-point decree, effective immediately, sets stricter penalties for the perpetrators of domestic abuse, sexual violence and stalking, and it expands protections for some of the most vulnerable women, including immigrants who lack residency permits.
“We think that in our country it is necessary to send a strong signal” to combat domestic violence, Mr. Letta said when he announced the measures on Aug. 8. After a spate of widely reported attacks on women, the decree is “a sign of radical change on the issue,” he said.

But new attacks in the wake of Mr. Letta’s announcement have bolstered criticism from victims’ advocates who say that stiffer penalties alone are not enough to protect women and stem domestic violence.

Last week, a woman in northern Italy was fatally stabbed by her former partner, who then hid her body in his car; a Sicilian woman was murdered in front of her child by her former husband, who then committed suicide; and a man whose motives are still unknown threw acid in a woman’s face in Genoa.

More than 80 women have been killed so far this year, most of them by husbands, boyfriends or former partners, according to an unofficial tally kept by the Italian news media. Many of the victims had called the police to report stalking or harassment. About 75 percent of the 2,200 women murdered from 2000 to 2012 — roughly one murder every two days — were killed by partners or former partners, according to a study carried out by Eures, a European Union agency that monitors social affairs and employment issues, in collaboration with the Ansa news agency.

A United Nations report last year on violence against women in Italy called domestic abuse the “most pervasive form of violence” in the country, affecting nearly 32 percent of women between the ages of 16 and 70, according to a 2006 survey. It also noted that more than 90 percent of the Italian women who were raped or abused did not report it to the police.

Victims’ advocates and counselors who work with battered women say they welcome the attention the government is focusing on a long-neglected social problem, but they contend that for the most part the decree misses the mark.

Italy does not need tougher laws, the critics say, because existing legislation is adequate, if arbitrarily applied. What is missing, they contend, is a better-organized, better-financed network of psychological, legal and financial assistance for women who decide to leave an abusive relationship.

“To make changes to the penal system without addressing the issue of how to better protect women means being blind to reality,” said Barbara Spinelli, a feminist and a lawyer who wrote a report on domestic violence in Italy for the United Nations’ Committee on the Elimination of Discrimination Against Women.

Reports by United Nations and European agencies underscore “the failure of Italian institutions and authorities to give adequate protection to women victims from their partners or ex-partners,” Ms. Spinelli said. “Either you carry out the necessary structural reforms, or this decree won’t help women.”

One such structural problem is the paucity of emergency housing for abuse victims. Rome’s principal emergency shelter for battered women consists of a nondescript three-room apartment near the once-legendary Cinecittà film studios. Serving Rome as well as the entire Lazio region of central Italy, it can accommodate no more than three women at a time, for a maximum stay of a week.

Given the scale of the need, there are “dramatically few places” for battered women to go to in Italy, said Emanuela Donato, one of the workers at Servizio Antiviolenza S O S Donna H24, a 24-hour-a-day service for victims of domestic violence and emergency shelter. So far this year, she said, more than 220 women have called the center’s help line. “Multiply that across Italy, and you get a sense of the emergency,” she said. “And that’s just the number of women who have the courage to recognize that they are victims and come to us for help.”

According to the recommendations of a Council of Europe task force, countries should have one shelter place for a woman and her children for every 10,000 residents. By this measure, Italy should have about 5,700 spots available in shelters nationwide, but it has just 500.

“The message that emerges is stay home, because if you leave there is nothing, or very little to help you,” Ms. Donato said.

In fact, in the current bleak economic situation, “many shelters and anti-violence centers around Italy are closing because of lack of funding,” said Oria Gargano, the president of Be Free, the association that manages the S O S shelter with Rome’s municipal administration. The government decree “doesn’t really touch this question,” she said.

Indeed, Italy’s prolonged recession is likely to “aggravate the problem” of domestic violence, said Patrizia Romito, a professor of social psychology at the University of Trieste, by making it more difficult for women to find the money they need to leave an abusive situation. Moreover, for potentially abusive men, the loss of a job can remove those “social anchors that can restrain violent behavior,” Ms. Romito said.

Victims’ advocates also say that cultural factors contribute to violence against women. So-called honor killings of women said to have disgraced their family were legal until 1981, said Luisa Pronzato, who runs a blog about women for the Milan newspaper Corriere della Sera. Paternalism “is part of our culture,” and it continues to permeate Italian society, she added.

Even police officers and health care workers called to respond to domestic violence are not immune from such attitudes, others say. “We had a recent case where a woman was threatened by her husband with a knife, and after calling the police, she was told by the officer, ‘Why don’t you cook a nice plate of pasta and make up?' ” said Nadia Somma, the president of Demetra, an association that runs a shelter in Ravenna, in northeastern Italy.

The new decree, Ms. Somma said, overlooks the reality that victims and abusers often continue to live together even after charges are filed because of Italy’s notoriously slow legal system, and victims’ advocates say that even convicted abusers rarely stay in jail for long.

The government has defended the decree, which still requires the approval of both houses of Parliament to become law, and Maria Cecilia Guerra, the deputy labor minister who led the task force that drafted the decree, said that beyond offering more protection for victims, the measures were intended “to increase awareness about domestic violence.”

Ms. Guerra acknowledged that while the network providing assistance to battered women needed to be improved, Italy’s economic crisis would require groups offering services to victims to develop better “synergy among existing structures.”

But Ms. Donato, the shelter worker in Rome, said it was difficult to operate the center with the little money it received. The lack of resources is “its own form of violence against women,” she said.

Violence against women is a cultural problem


Two days ago, Antonella Russo – a mother of three – was shot dead by her estranged husband at her mother’s home in Siracusa, Sicily. On the same day, a lawyer was arrested in Verona, northern Italy, after the body of his ex-girlfriend was discovered in the boot of his car.

These attacks are just the latest in a wave of so-called ‘femicide attacks’ in Italy, or the killing of women by males.

In June, Italy’s biggest trade union, the CGIL, recorded 81 victims in 2013 alone. And in 2012, the number of victims stood at 124, according to Italy’s national statistics agency ISTAT.

Last Thursday, the Italian government passed a new anti-femicide law, which it trumpeted as a “radical change” in the “relentless fight against the sad phenomenon of femicide".

Measures include the obligatory arrest of those caught in the act of stalking, or physically abusing victims, and obligatory police investigations once complaints have been lodged.

Women will now be kept informed about any legal processes involving their attackers, and violent partners will be evicted from family homes.

Prevention and education
But for Luca Cardin, editor of Zero Violenza Donne, a website that aims to raise awareness about gender violence, the new law is nowhere near radical enough.

While he acknowledges it helps protect victims of violent crimes, he claims that it is also ‘repressive’ and simply doesn’t go far enough.

For Cardin, the fact that the government decided to issue the decree in August is extremely telling.

“The law is positive in terms of the protection it offers to victims, but it doesn’t mention anything about the culture of violence against women, or about education in schools.

“Children also need to be taught more about gender equality and sexuality in school. Other countries do this a lot more,” he added, pointing out that, in 2012, the World Economic Forum ranked Italy 80th in its gender gap ratings.

Above all, he said, there are still widespread myths about gender violence that need to be dispelled.

“In most cases, it’s a boyfriend, a husband or someone who lives under the same roof as the woman. Only in a minority [of cases] are the attackers unknown,” he said. “While cases reported in the press tend to concentrate on foreign attackers, they are in fact predominantly Italian.”

Anti-violence centres
As well as sex education classes, Cardin and his colleagues would also like to see more investment in “centri di antiviolenza” (anti-violence centres), where women who are victims of violence can seek help and take shelter.

“These [centres] are important because as well as offering support to women who have suffered from violence, they can also help them to identify warning signs that can lead to dangerous situations and to offer them psychological support in their daily lives.

“Physical violence is just one aspect – although it may be the most appalling – of abuse, which can also be financial or psychological.”

The creation of anti-violence centres, as well as a new programme for anti-violence education in schools, would be more in line with what Josefa Idem, the former Minister for Equal Opportunities and Laura Boldrini, President of the Chamber of Deputies had in mind, he claims.

Reporting violence
Meanwhile, an Italian underwear company is tackling the problem from a different angle.

“We want to get straight to the heart and to the eye: to shake up, upset, start a reaction and create a movement against violence against women,” says the campaign literature.

“To break the vicious circle of violence, it takes enormous strength and great courage. We want to … give strength to all women and encourage them to report the violence they experience.”

One month on, the campaign’s Facebook page already has more than 32,300 ‘likes’ and a total reach of 7 million, Yamayay claims.

“We’ve had a really positive response on Facebook, with lots of people talking about the issue,” a spokesman told The Local.
The new law, said the spokesman, is an “extremely positive step” in the fight against femicide.

And the campaign won’t stop there. The campaigners have also organized a flash mob in Florence on September 12th, and in Milan on the 17th, to spread their message. You can see a video of their campaign below. 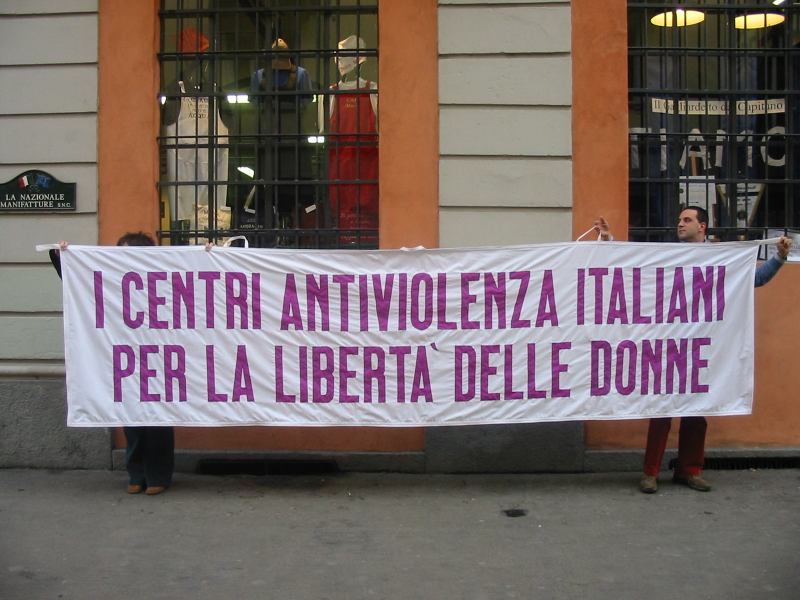